Joseph Eidelberg, a Jew who once came to Japan and stayed for years at a Japanese Shinto shrine, wrote a book titled “The Japanese and the Ten Lost Tribes of Israel.” He wrote that many Japanese words originated from ancient Hebrew.

For instance, we Japanese say “hazukashime“ to mean disgrace or humiliation. In Hebrew, it is “hadak hashem” (tread down the name. See Job 40:12). The pronunciation and the meaning of them are both almost the same.

We say “anta” to mean “you,” which is the same in Hebrew. Kings in ancient Japan were called with the word “mikoto,” which might come from a Hebrew word “malhuto“ which means “his kingdom.” We call the Emperor of Japan “mikado.” This resembles the Hebrew word “migadol“ which means the noble. The ancient Japanese word for an area leader is “agata-nushi”; “agata” is area, and “nushi” is a leader. In Hebrew, they are called “aguda“”nasi.”

When we Japanese count “One, two, three… ten,” we sometimes say:

This is a traditional expression, but we Japanese don’t know what this means if we think of it as Japanese.

It is said that this expression originates from an ancient Japanese myth. In the Shinto myth, the female god called “Amaterasu” who manages the sunlight of the world once hid herself in a heavenly cave, and the world became dark. Then, according to the oldest book of Japanese history, the priest called “Koyane” prayed with words before the cave and in front of the other gods to have “Amaterasu” come out. Although the words that were said in the prayer are not written in the book, a legend says that these words were “Hi, fu, mi….” 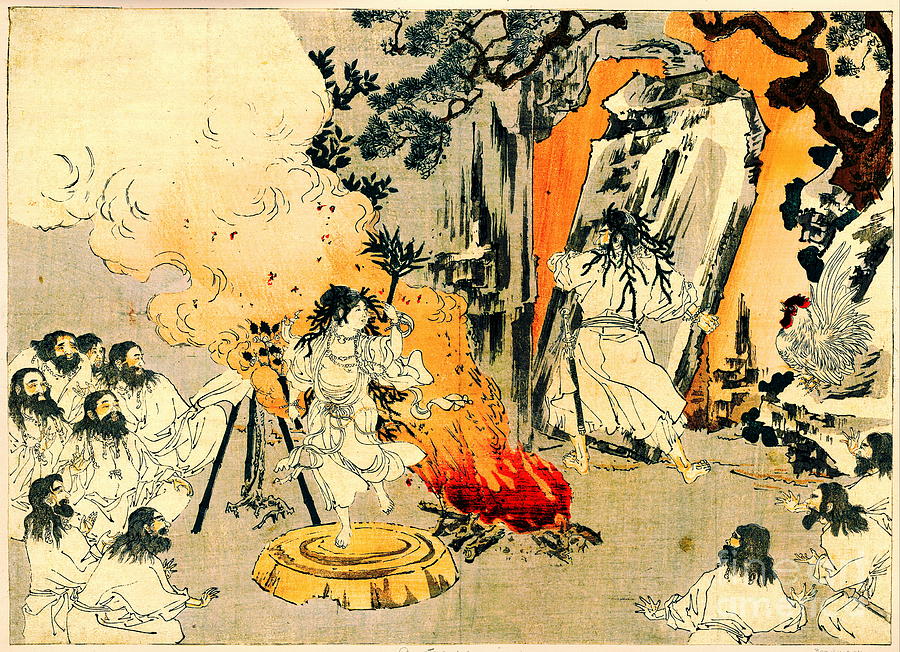 Joseph Eidelberg writes that this is a beautiful Hebrew expression, if we suppose that there have been some changes in the pronunciation throughout history. These words are to be spelled:

This means: “Who shall bring out the beautiful? What words shall we say for her to come out?” This surprisingly fits the situation of the myth.

Moreover, we Japanese not only say “Hi, hu, mi…,” but also say with the same meaning: 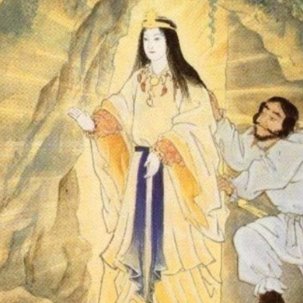 But the last word “towo” the priest “Koyane” and the surrounding gods said together. If this is the Hebrew word “tavo,” it means “(She) shall come.” When they said this, the female god “Amaterasu” came out. “Hi, fu, mi…” and “Hitotsu, futatsu, mittsu…” later were used as the words to count numbers. [sounds a lot like ‘hide-n-go-seek’]

In addition, the name of the priest “Koyane” sounds close to a Hebrew word “kohen” which means a priest. Eidelberg shows many other examples of Japanese words which seem to have a Hebrew origin. His list contains several thousand words. I don’t believe this is a mere accident.

In ancient Japanese folk songs, there appear many words which we cannot understand as Japanese. Dr. Eiji Kawamorita says that many of them are Hebrew. A Japanese folk song in Kumamoto pref. is sung “Hallelujah, haliya, haliya, tohse, Yahweh, Yahweh, yoitonnah….” This also sounds like Hebrew.

There are also traces of the forgotten culture of the Hebrews in the mythological story of the god, Isanagi, and the goddess, Isanami, as these are described in the Kojiki and Nihongi.

It is written that the couple married after walking around the Heavenly Pillar, exclaiming the words in Japanese. Ana-niyasi: “Now the male deity, Izanagi turning by the left and the female deity, Izanami by the right. They went round the pillar of the land separately…” (Nihongi, book I, 1.5:3).

Also, the wedding between Izanagi and Izanami traces back to the ancient Hebrew custom, which many Jews still practice, namely, the bride walks in a circle around the groom, presenting the heavenly pillar. According to Eidelberg, these heavenly pillars do exist in Jewish literature, especially in the Book of Job, Ch. 26, verse 11. According to Eidelberg, the words Ana-niyasi are indeed mentioned in Kojiki 5:5.

Again, the word Ana–niyasi does not have any meaning in the Japanese language; but, with a slight change in nuance, it does in Hebrew, the words my sound ana-nisa, which means: “I wed.”

It is difficult to believe that this, too, could be mere coincidence. The meaning of the words ana-nisa in Hebrew fit fairly exactly in the context of the mythological story of the wedding between Izanagi and Izanami.

Joseph Eidelberg points out that there are many Japanese words which are very similar to Hebrew in both meaning and pronunciation.

A Japanese word “anata” which means you is also said “anta”, and in the dialect of Kyushu is said “atah”. In Hebrew this is also “atah” or “anta”.

Japanese “ito” which means thread is “hut” in Hebrew. The stick with white papers of zigzag pattern put on its upper part which the Shinto priest waves is called “nusa” in Japanese, while a Hebrew word “nes” means flag. Japanese “ude” means arm and Hebrew “yad” means hand. Japanese “kata” which means shoulder is “qatheph” in Hebrew. Japanese “owari” which means end or finish is “aharith” in Hebrew.

Japanese “samurau” means to serve or guard (for the noble) and Hebrew “shamar” means to guard (Genesis 3:24). In Japanese, from “samurau” came a word “samurai” which means Japanese ancient warrior or guard.